With the first major sporting event, Australian Open 2016 countdown moving along nicely in Melbourne, we think it’s a perfect time to share with you these campaign images of Parisian Claudia Fratini‘s fashion brand IFWECANNOT BETOGETHER and its Spring Summer 2016 collection.

Yes, Claudia confirmed with us the background used in her campaign shots is a basketball court, but we’re sure her clothes will score as well with the style set on the spectator side as the winning serves hitting the tennis court at Rod Laver Arena in Melbourne during the Australian Open 2016. Just imagine, how smashing the 2016 Spring Summer collection will look right here in Melbourne?!! 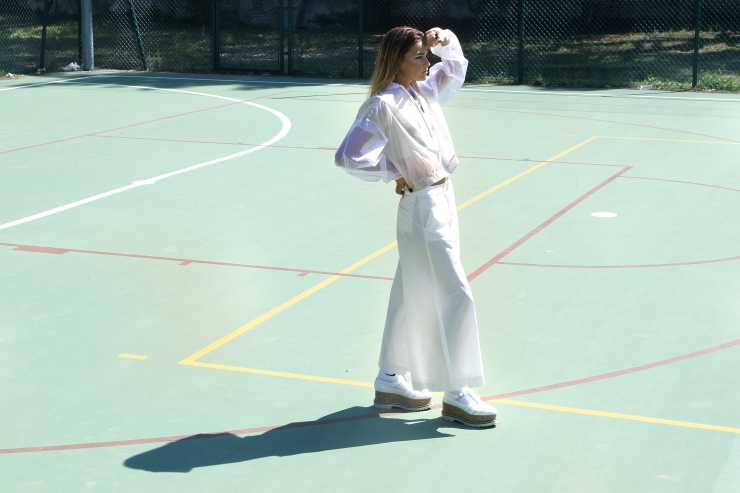 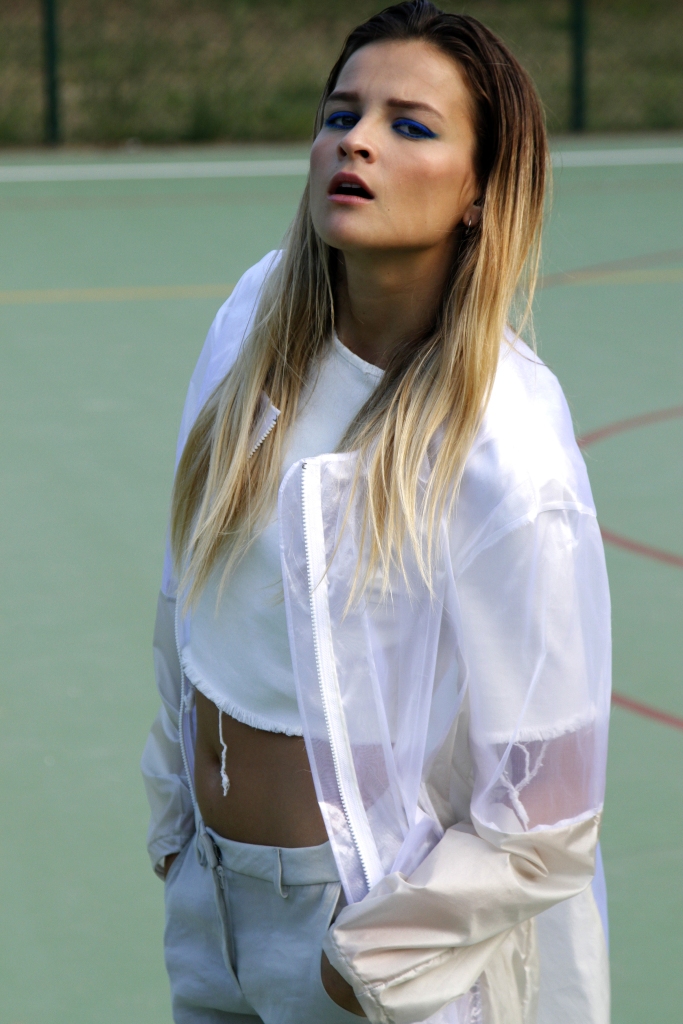 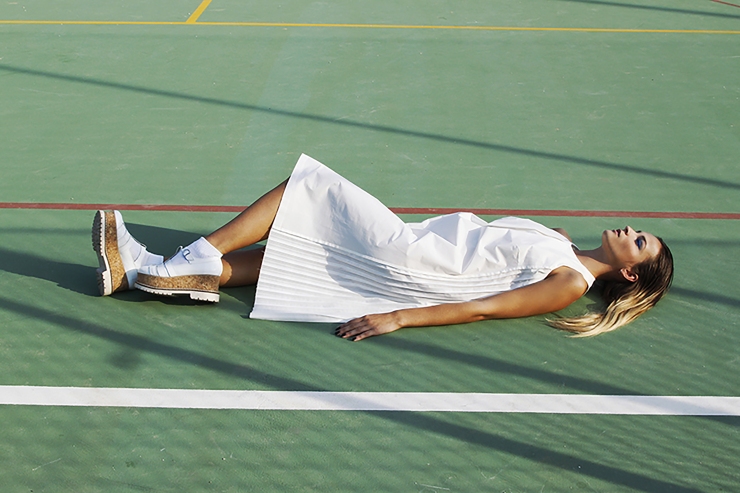 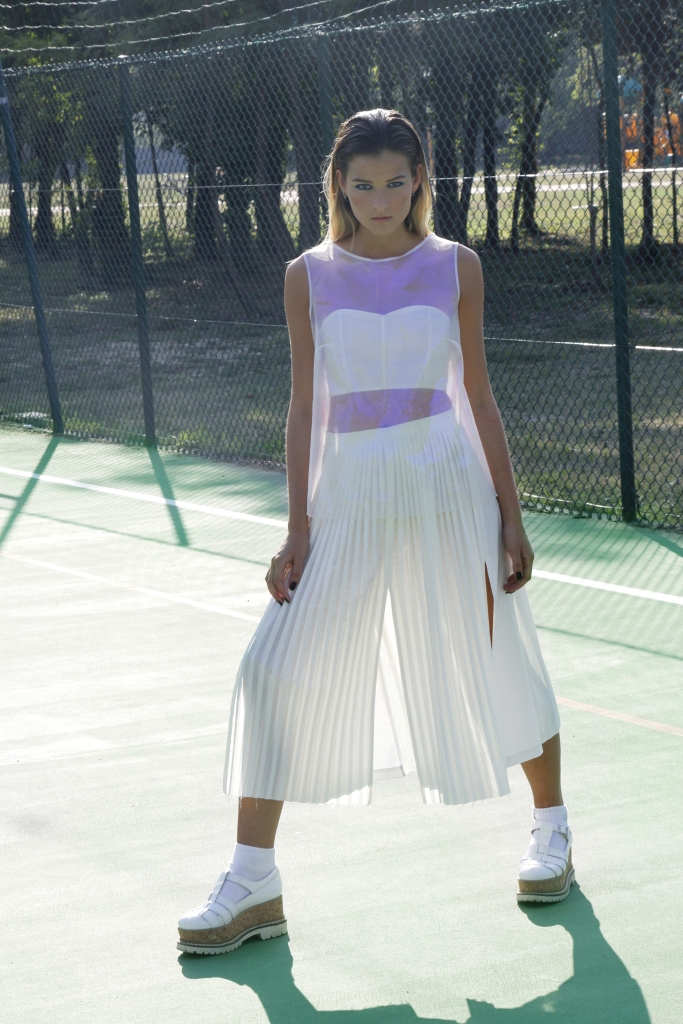 Certain traits are beginning to resurface with each season that Claudia Fratini releases for IFWECANNOT BETOGETHER; voluminous silhouette, sense of movement, chic execution, mixture of materials and textures, devoid of branding. We’ve applied these same descriptions on the Autumn Winter 2015 collection in an earlier post, the same can still be said for her Spring Summer 2016 collection, but notice these major differences. The fabric has gone soft, sheer, translucent and even breathable to reflect the lightness of spring, but in the spring breeze, the silhouette is still voluminous, the sense of movement as the IFWECANNOT BETOGETHER woman walks down the street, equally dramatic.

Pleats are currently in vogue and the pleats that appear in her skirts (a clear favourite in our team!) should appeal to many. According to Claudia, the pleated skirt seen above is made of three different fabrics: high density poplin, glossed pleated organza and iridescent organza. Well, don’t we always go for the best stuff?

For those not used to wearing so much white, as white can be a challenging colour when worn entirely in one outfit, Claudia has been very conscientious to include a few trans-seasonal black pieces (pictured below) to complement the collection, like a sleeveless jacket. If you’re still feeling a bit chilly from winter, there’s also a long sleeved option.

Like the collections before, the “Made in Italy” label will score very well with buyers and consumers, not only in France but worldwide.

On a different note, we’re so taken by the shade of minty green of the court as seen in these pictures, and when juxtaposed with the court lines, has a very 80s Italian, Memphis Group inspired vibe. Oh, and we noticed the contrast panel of fabric on the jacket below too. Très chic! 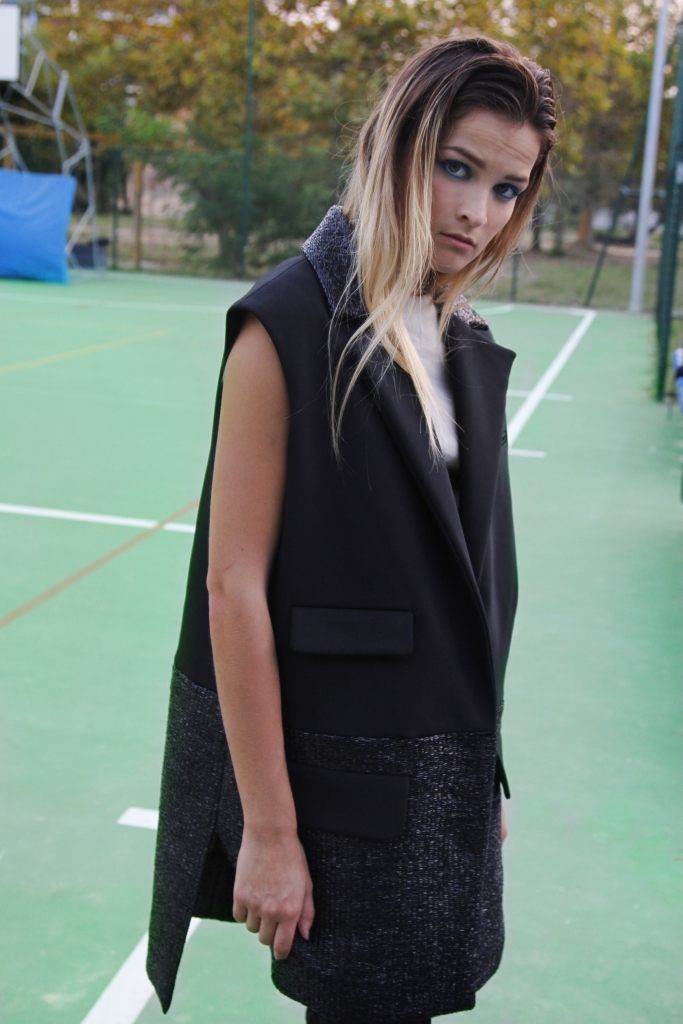 Really, as much as we love to wield our words, you can’t beat a video to express movement. Check out the video that was specially shot to showcase the Spring Summer 2016 collection. It’s a slam dunk, we think. 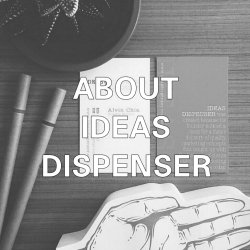 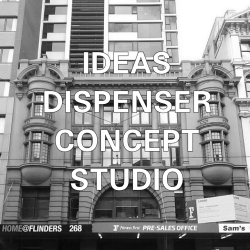 The new man of the house, these days no decision is made without his "consent" or without considering his interests!
I've been going to this humble, unpretentious canteen in #Florence for over 10 years, I've even seen the staff grow old over the years, it's heartwarming (likewise they've seen my style and hairstyle change over the years!), this is the REAL impact of Australia's #travel ban, it's disempowerment; I'm not where and who I want to be.
This #Melbourne lockdown, I'm helping clear out my family's stuff, anyone who's size 39 and interested in these #Prada, let me know, I've got them listed on eBay.
Loading Comments...